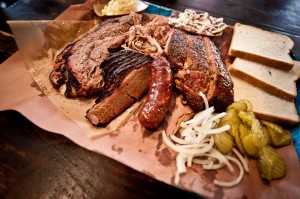 Franklin BBQ made its first mark on the Austin BBQ scene in late 2009 on an East Austin parking lot. From the walk-up window of a travel trailer turned brisket stand, patrons quickly noticed the Franklins were selling the best barbecue around. By spring, the line of admirers snaked around the block, and the press followed. In less than two years, the duo could count contributors from The Washington Post, Texas Monthly, and Cooking Channel among a growing chorus hailing Franklin among America’s BBQ elite—mentioned in the breath as Smitty’s, Kreuz’s, and other stalwart temples to the holy craft of smoked meat that line the Central Texas brisket belt. In the summer of 2010, Bon Appetit hailed Franklin BBQ as the best in America.